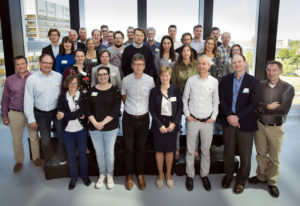 An international consortium of research groups aims to develop novel antibiotics against the tuberculosis bacteria and two other deadly bacteria. The European Union has awarded a total of EUR 18 million to the RespiriTB and RespiriNTM projects. Researchers from the Leiden University Medical Centre (LUMC) will be taking part in the study, that is set to last six years.

The nine research teams that make up the RespiriTB/RespiriNTM consortium will be working together to identify new weapons in the fight against the deadly bacteria M. tuberculosis and the related bacterial species M. avium and M. abscessus. Worldwide, these bacterial species kill more than 1.5 million people each year.

Meindert Lamers, Associate Professor within the Cell and Chemical Biology department of the LUMC is consortium coordinator. “Multiple research teams are involved, because the phases of this large-scale study call for a range of expertise,” explained protein structural biologist Lamers. “We must first identify a suitable protein vital for the bacteria which will then be tested using existing means. The outcome is what is known as an inhibitor, a substance that kills the bacteria by inhibiting the protein. Finally, following chemical optimisation, this inhibitor will be tested during clinical in-human trials.” The researchers will also be investigating whether a newly developed product has a synergistic action with bedaquiline, a drug recently developed by research partner Janssen Pharmaceutica for the treatment of drug-resistant tuberculosis.

Lamers is delighted that pharmaceutical and academic institutions are joining forces within the RespiriTB/RespiriNTM consortium. “This research is urgently needed. The treatment of tuberculosis is difficult and time-consuming, and is increasingly hindered by antibiotic resistance. The two other bacteria kill less people, but very few drugs are available for their treatment. Our aim is to develop more effective antibiotics that also require shorter term treatment. We will be making use of various weaknesses of these three bacteria, and during the course of the research programme will use multiple approaches to increase the likelihood of success.”

This project has received funding from the Innovative Medicines Initiative 2 Joint Undertaking under grant agreement No 853932 and  853903. This Joint Undertaking receives support from the European Union’s Horizon 2020 research and innovation programme and EFPIA. The communication reflects the author’s view. Neither IMI nor the European Union, EFPIA, or any Associated Partners are responsible for any use that may be made of this information.